We implement all health protocols regarding COVID-19. Learn more

Book your cruise and enjoy the best sights of Santorini like never before!

Booking a Private Catamaran Tour in Santorini is a dream come true! We offer daily cruises to Santorini’s beautiful sights. The best way to spend a day at sea and create memories with your loved ones at a unique setting.
BOOK NOW

Embarkation on the Vlychada Marina, located in the south part of Santorini. Our first stop on the tour is Red beach, one of the most beautiful and stunning beaches on the island, all of its unique colors! It is located only some steps away from the ancient site of Akrotiri.

The small beach area creates a considerably crowded atmosphere and there are many days when most visitors choose not to visit the beach and instead admire this unique landscape of red and black volcanic rocks from the boat. Snorkeling is highly recommended due to the interesting rock formations one can find at the bottom of the sea.

The next stop is White beach with crystalline waters and a sharp contrast to the nearby beach of Kokkini (Red) beach. This beach is accessible by sea only and less popular than the neighboring cove and less crowded. Ideal place for landscape photography.

Next, we are about to explore The “Faros” or the lighthouse, manufactured in 1892 by the French Company of Lighthouses in a square shape. It first worked, in 1892 with petroleum and its luminosity was 23 n.m.While you are there, try to spot the Indian head rock, one of the destinations we will explore on this tour, on the south shore.

Our next adventure awaits us at Aspronisi (meaning “white island”) or Strogili, a small uninhabited rocky island. The island is located west of Santorini, south of Thirassia, and west of the Kameni islands. Is a part of the Santorini caldera, which formed as a result of a volcanic eruption in 1450 BC.

Afterwards, we visit Thirassia, a small satellite island of Santorini with a population of about 270 people lies very close to Santorini. In fact, both formed the same island until the huge volcanic eruption which is estimated to have taken place in 1628 BCE, when it detached Thirassia from the main island of Santorini.

Oia is a traditional settlement in Santorini’s northwestern region, also known as ‘Apano Meria’ or ‘Anomeria,’ and the people who live there are known as ‘Apanomerites.’

The village is located about 150 meters above sea level. Oia was severely damaged in the 1956 earthquake, and much work has gone into its restoration.Oia’s natural beauty is unparalleled. In fact, it is nearly impossible to put into words.

At our next stop, we will have the chance to enjoy three unique places. Immerovigli, Firostefani and Fira old port. Traditional houses, narrow paths, and views of the volcano are prominent features.

There are two ports on Santorini. The Athinios port is for ferry and commercial boats, while the Gialos port, also known as the Old Port of Fira, is only for cruise ship passengers. Gialos is located just below Fira, Santorini’s capital.

Santorini has a one-of-a-kind natural beauty and wild scenery created by volcanic eruptions. Within the caldera, this activity created the dark-colored islands of Nea and Palea Kameni.

One of the best places to explore in Santorini is Palia Kameni (old burnt), one of the two volcanic islands in the middle of the Santorini Caldera, known as Hot Springs. The temperature difference between the sea and the Hot Springs is approximately 5 degrees Celsius. The water contains sulfur, which is beneficial to the skin.

Our time to head back to our base is finally here. Gather your belongings, say your farewells and we will meet again soon!

What we provide with our Daily Cruises

Discover the caves and the amazing depth! Enjoy snorkeling and paddle boarding for both adults and children.

Our professional crew guides you and take you with safety to the most beautiful places. 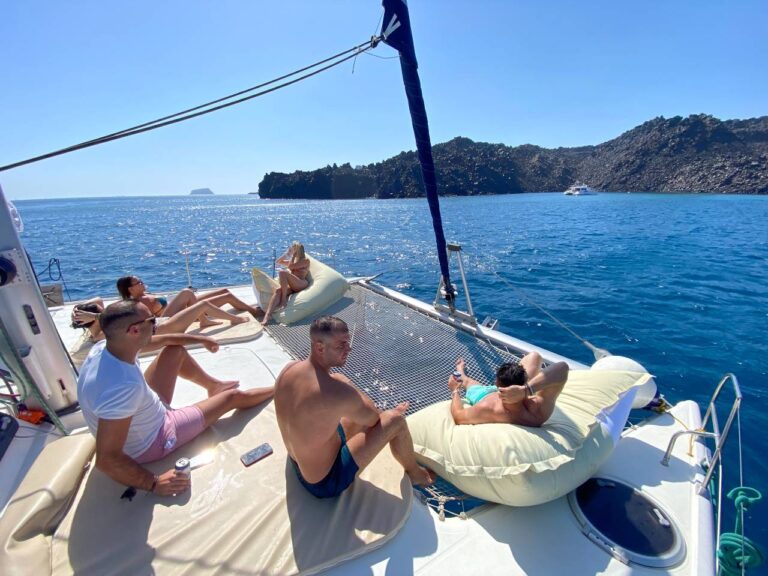 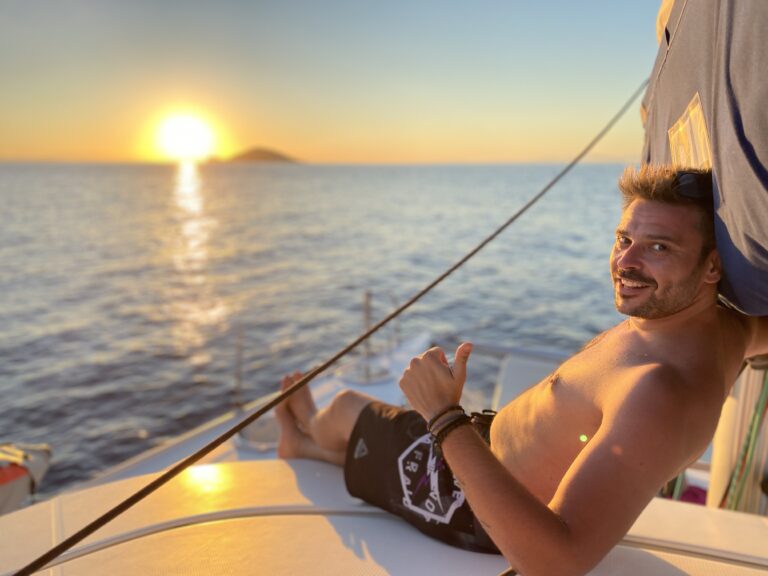 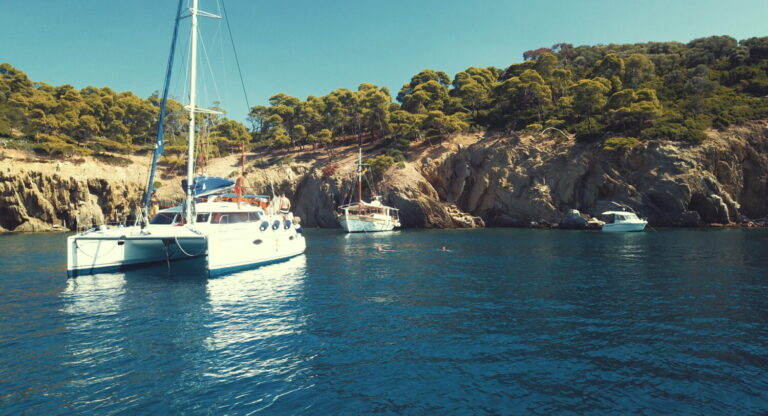 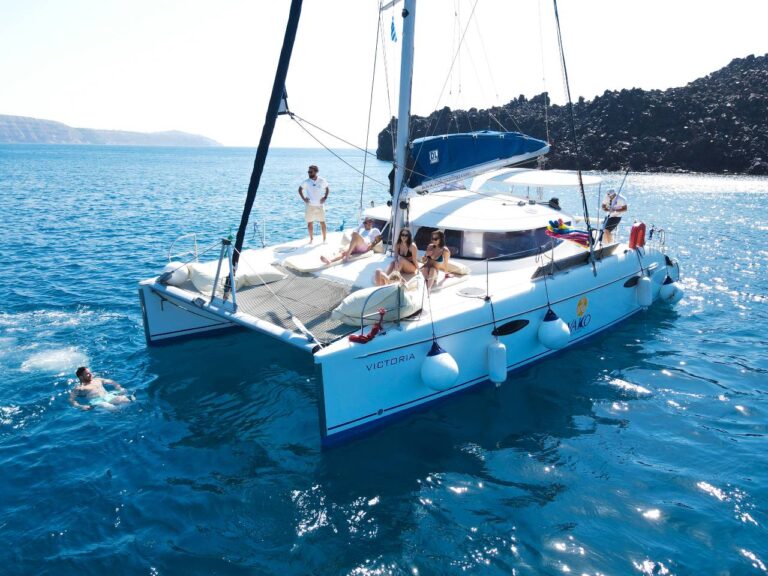 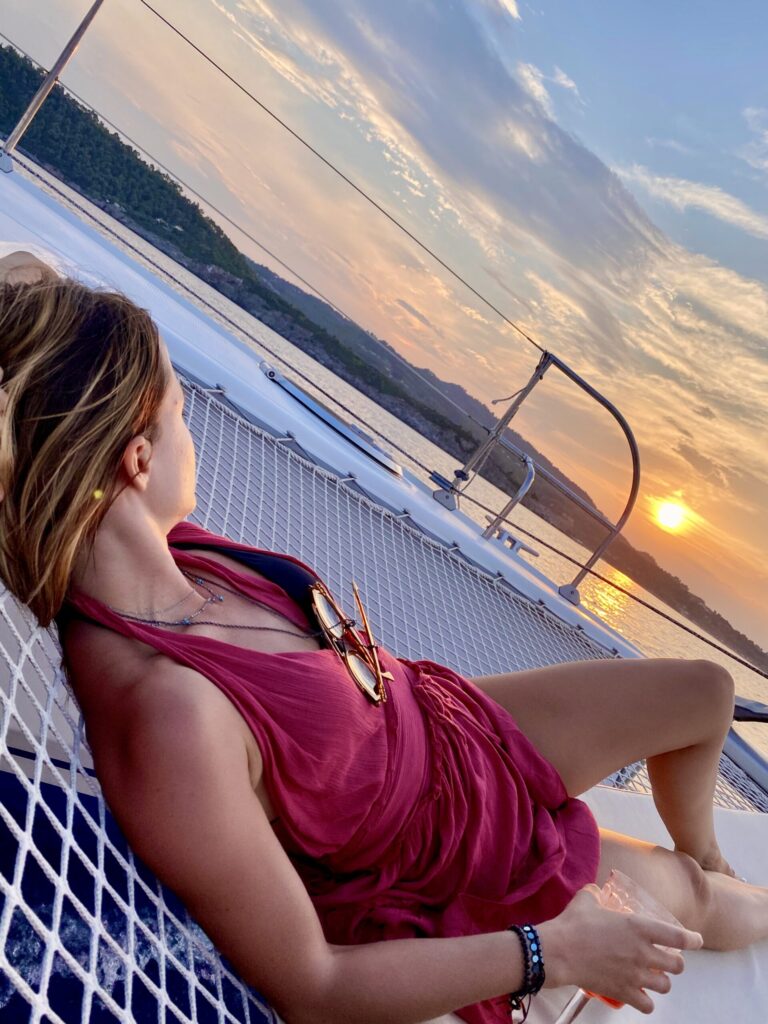 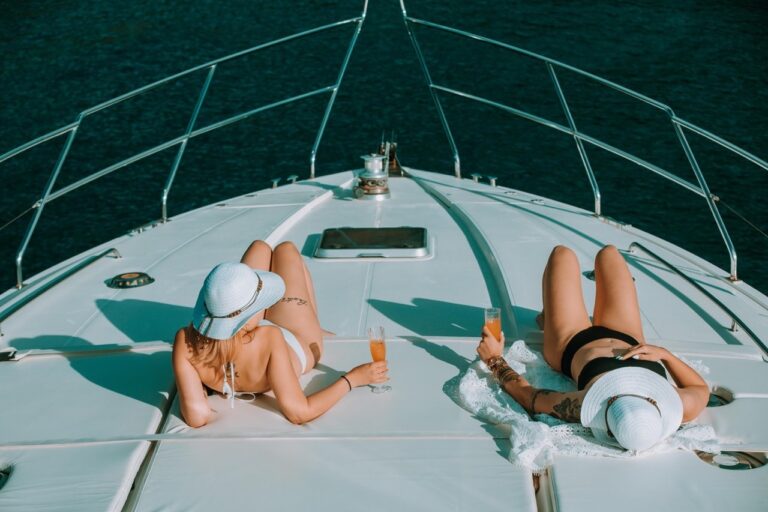